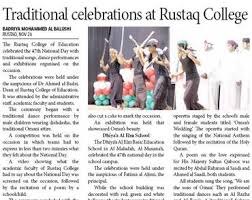 Comprehensible input is the key to language acquisition (Krashen, 1982; Rost, 2001), and the listening comprehension is particularly important because L2 learners employ their listening abilities to make sense out of received input. Or, as Kurita (2012) puts it, listening comprehension is an L2 acquisition prerequisite. Therefore, many universities include listening comprehension in the teaching curricula. This has increased the significance of testing listening comprehension since tests can be used to make decisions about curricula (Carroll, 1968, cited in Bachman, 1990). A `high stakes proficiency summative test`, that is, an International English Language Testing System (IELTS) listening comprehension, was given at Rustaq College of Applied Sciences in Oman in 2007-08 to evaluate target objectives. IELTS uses a 9-band scoring system to measure and report test scores in a consistent manner. Students received individual band scores for Listening, Reading, Writing and Speaking and an overall band score on a scale from one to nine. The students at Rustaq College of Applied Sciences in Oman were looking to achieve `Competent User` status at 6 band on the scale, which is defined in IELTS` material generally as defining someone who: `Has generally effective command of the language despite some inaccuracies, inappropriacies and misunderstandings. Can use and understand fairly complex language, particularly in familiar situations.` The students at Rustaq College, Oman, were trainee teachers at local primary schools, as a part of their practicum evaluation program as they became qualified English language teachers. Oman`s Ministry of Education required IELTS 6 as a minimum requirement for graduation.

The test was a part of the final examination assessing reading, writing and speaking skills as well. It was Academic, that is for candidates who want to study at graduate or postgraduate levels, and for those seeking professional registration, rather than General, which is for candidates seeking to migrate to English speaking countries (Australia, New Zealand, Canada, New Zealand, and the UK, etc.), and for those wishing to train or study at below degree level although, in the listening component of the IELTS test, Academic and General don`t differ. IELTS` Listening test has four sections each with ten questions. The first section is a conversation between two speakers. The second section is a monologue. The final two sections are concerned with situations related to educational or training contexts. The third section is a conversation between up to four people and the fourth section is a monlogue. A variety of question types is used, including; multiple choice, matching, plan/map/diagram labelling, form completion, note completion, table completion, flow-chart completion, summary completion, sentence completion, and short answer questions. Candidates hear the recording once only and answer the questions as they listen. The students have thirty minutes, plus ten minutes answer sheet `transference time`, to complete it. Learners were expected to be able to identify the main ideas, specific information, the speakers and the context of the passages. They were given six hour-long listening classes a week to practice. Hence, the test summated achievement in an assessment of what learners mastered from what had been taught and their attaining of the set course objectives. (Davies, 1990). It had a `scaffolding` element insofar as it prepared learners to master skills necessary to further their level.

Buck (2001) describes listening comprehension as the result of an interactive cognitive process between `bottom-up` and `top-down` processing. In bottom-up processing, the listening input is dealt with in successive phases, starting with decoding into phonemes at the lowest phase, and ending up with semantic interpretation at the highest phase. In top-down processing, listening input is interpreted with reference to the listeners' pre-existing background knowledge (Harmer, 2001). This has implications for evaluating listening comprehension tests. One of these is the necessity for including items targeting both types of processing; for example, items that ask learners to infer the setting of the conversation, or the role of the participants, involves top-down processing, while items asking for the recognition of certain words requires bottom-up processing. Activating both types of processing pushes learners into interacting with input, which facilitates comprehension (Richards, 2008). The importance of pre-established background knowledge in processing received input is emphasised by schemata theory. Schema is `a theory of language processing which suggests that discourse is interpreted with reference to background knowledge of the listener` (Nunan, cited in Beatty, 2010, p 99). Accordingly, learners comprehend input better, when schemata that they own to is activated. In his study, Buck (2001) concluded that activating learners' schemata leads to better comprehension. Learners reported creating mental representations about passages coming from their background knowledge. Consequently, listening comprehension tests like IELTS` include passages supported by context; assisting learners to organise their knowledge and experiences of the theme before input is received. Buck (2001) argued that decontextualized passages `rob` the student of mental resources needed in the listening comprehension (p. 22). IELTS` way of contextualising listening passages in listening tests is to indicate the topic and give test-takers an opportunity to preview questions. This is `listening support`, according to researchers Chang and Read, 2006 (cited in Kurita, 2012), and is a strategy that, insofar as it provides helpful tools, is recommended for incorporation into test construction.

At the beginning of the IELTS` listening test, the student hears instructions and a sample question. Then he or she reads section 1 questions, and listens to section 1 before answering the questions. This information is essential for activating learners' linguistic and world-knowledge schemata about the topic and the text type. It involves learners in a process of hypothesis generation by making predictions about the input and then testing their hypotheses against their predictions when listening. This process is the core of comprehension (Buck, 2001). Many studies have confirmed the positive effects of previewing questions on testing listening (Chang and Read, 2006). The importance of this `listening support` is in providing learners with a purpose for listening, and answering. It directs them towards selecting relevant parts of the input to complete the task. The test`s structure guides learners to approach the tasks using top-down processing, which helps compensate for deficiencies in linguistic ability. IELTS` Listening test section 1 is a conversation between two people, set in an everyday context (e.g., a conversation in an accommodation agency). Section 2 is a monologue set in an everyday social context (e.g., a speech about local families); section 3 is a conversation between up to four people set in an educational or training context (e.g., a University tutor and student discussing an assignment), and section 4 is a monologue on an academic subject (e.g., a University lecture). Students listen to the four sections and write their answers to a comprehension based on what they hear. The answers are then transferred to an answer sheet if the students didn`t use the answer sheet from the start.

Fulcher and Davidson (2007, cited in Anckar, 2011) highlight validity as the key to the construction and evaluation of tests, that is, the extent to which the test measures the achieving of intended objectives. (Bachman and Palmer, 1996) It can be evaluated through examining target objectives and actual objectives achieved as demonstrated by the students` test results. Learners may be asked to sequence actions/events, and so they need to recognize `signposts` establishing the sequence. Listening for specific information is equivalent to the capacity to distinguish between true or false. In IELTS multiple choice items can consist of a stem and alternatives. Learners have to identify the alternative that is not given: a distracter (see Appendix). The ability to disregard irrelevant information must be present in the student. Identifying the main idea of the audio is essential. The validity of the test depends on the usefulness of the objective. In IELTS 6 the objective is for the students to demonstrate `some knowledge of complex sentences`, which the test validates. Questions' order should match with information's sequence, Buck (2001) suggests. Bias can occur if some test-takers are advantaged by enabling them to complete the tasks depending on their background knowledge, rather than listening comprehension (Anckar, 2011), but it would be foolish to criticize those thirsty for knowledge, who quench that thirst, and so gain an advantage because they`ve improved their schemata.

Examined in tests, reliability (Linne and Miller, 2005, cited in Anckar, 2011) is measurable consistency (Hughes, 1989) achieved through rigorous invigilation (Bachman, 1990) minimizing opportunities for cheating followed by moderation sessions in which precise marking rubrics are adhered to; to decrease inconsistencies between markers (Bachman, 1990). Although IELTS uses them, true-false questions aren`t universally thought appropriate for testing listening, because test-takers find it difficult to extract what is not said in the listening (false statements) due to the lack of a reference text to use for checking. Employing a variety of task types is useful in reducing limitation, for example, sentence-completion. The problem of speculation in T/F items can be solved by inserting NG (Not Given) as a third option, which is to be found in IELTS` testing. Consequently, learners should have sufficient practice in this.

In conclusion, the IELTS` Listening comprehension evaluated in terms of the extent to which it is validated and reliable, shows that the test's items reflect adequately upon the target objectives. The test equips learners with `listening support` to facilitate comprehension. However, `backwash`, that is, results subsequent to analysis, indicate that the test could be improved through more rigorous invigilation and moderation to ensure its consistent validity and reliability throughout all of the countries where IELTS testing is given.

Peter decides to go to the cinema.