When teaching ‘Presentation’, a form of EAP (English for Academic Purposes) offered by institutions to government clients, who want to ensure that their employees are able to present their point of view to English speaking foreigners, the ELT professional invariably encounters the problem of explaining how it is that the English pronunciation of ‘the’ (θ) and ‘three’ (ð) sounds differently to the ear, so are notated differently in the international phonetic alphabet (IPA), although either are fricative consonants, or ‘spirants’, that is, the two sounds comprising ‘th’ are made by the friction of breath in a narrow opening (see Figure 1), as f/th/v/h/sh/s/z, and ʤ, which is the phonetic symbol for the sound used in the pronunciation of ‘jam’, for example, and in the name, Jonah. 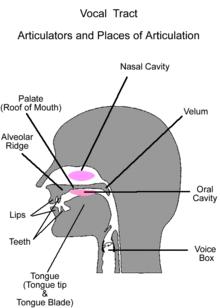 It was the science fiction writer, Frank Herbert, who developed the concept of voice in his novel, Dune (1965), which was about a planet called Arrakis, a desert world whose people, the Fremen, relied heavily on their knowledge of the use of sound for survival. For example, the Fremen employed a device to make rhythmic sounds upon the surface of the sand of the desert to call worms, that is, giant creatures resembling the sandworms of Earth, which the Fremen then harnessed to ride across the desert, as a simple and convenient means of transporting themselves, from one place to another.

In Dune Herbert describes the Bene Gesserit witches’ training in ‘Voice’, a means of issuing commands on a subconscious level, so that others can’t resist being compelled to obedience. Gesserit Voice can be strong enough to force physical action, and even paralysis, in the subject. Voice can be subtly employed in any manner of conversation, public speaking, or debate; to soothe, convince, persuade, influence, and otherwise enhance the spoken word. If the target understands what the Voice is, and how it works, and is aware that it’s being used, it may be resisted. Voice is useless against targets who cannot hear, and in English language teaching the voice of the teacher is useless with those who don’t want to understand the ‘target language’. Moreover, the native speaker of English would be resistant to Voice if it were used upon them, because they can’t understand the language of the desert peoples of the planet Earth’s Middle East region. However, a ‘Weirding Module’ (see Figure 2) is a sonic weapon introduced in and specific to Dune, the 1984 film adaptation directed by David Lynch, which translates specific sounds into attacks of varying potency. 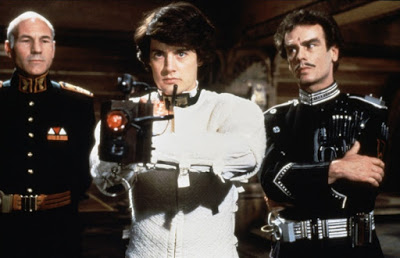 The leading family on Arrakis is House Atreides, and its head, Paul Atreides, and his mother, ‘the Bene Gesserit witch’, Jessica, teach Voice to their Fremen army, ‘My own name is a killing word.’1 In fact the Fremen shout the name by which Paul Atreides is known by them as a battle cry, ‘Muad’Dib!’ (see Figure 3) Moreover, Paul’s name is a trigger for the Weirding Module, that is, the sound weapon that the Fremen are instructed in the use of by the Gesserit Voice teachers as a part of their ‘Weirding Way’. Consequently, for Arabian students who’ve seen the subsequent TV series, Dune (2000-), and who identify themselves with the science fictional characters, the Bene Gesserit witches’ advice to the desert dwelling Fremen is sociopathic, ‘… you will be able [to] paralyze …. an enemy or burst his organs.'2

Because of the language barrier, forcing the ELT professional to shut up, and have their organs explode, is a matter for the students’ understanding that Voice won’t work on those who can hear, but can’t understand their language of Arabic, for example; so it’s only necessary to use ‘plosive consonants’. Also known as occlusives, or simply ‘a stop’, the sounds of pulmonic consonants, p/t/k (voiceless ‘plosives), and /b/d, and g (voiced ‘plosives), are made when the vocal tract is blocked, so that all airflow ceases. In order to slave drive the teacher, and give him/her a heart attack, so that all airflow ceases, if he/she shows any resistance to the coffin prepared, it’s only necessary for the students to deploy the ‘plosive consonants of coughing, and sneezing, that is, nasal consonants, n, m, and the IPA ŋ (-ng), to inflict symptoms of systemic inflammatory response syndrome (SIRS); the body’s response to infectious or noninfectious ‘insult’.

Although approximant consonants, produced by narrowing, but not blocking the vocal tract, as by bringing two parts of the mouth closer, for example; the tongue and the roof of the mouth, as in the sound for ‘l’ in ‘like’, ‘r’ in ‘right’, and semivowels, as ‘y’ in ‘yes’ and ‘w’ in ‘wet’, are indicated as better sounds from the point of view of the instructor of English language to foreigners, so to avoid heart attacks and SIRS illnesses, they don’t produce English speakers, but approximations, which is the trade off compromise arrived at between teachers, who want to breathe and live, and students who sometimes don’t want to learn. 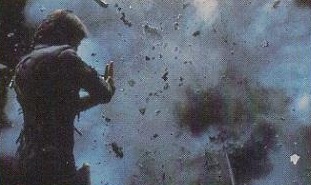 Director David Lynch’s Weirding Module wasn’t a sound weapon derived from Frank Herbert’s 1965 novel, Dune, although the device is a part of the science fictional armory available to the Fremen in Part One of director Denis Velleneuve’s 2020 film version of the 1965 novel. In Lynch’s 1984 movie the Weirding Module weapon system came in two pieces: the throat microphone and a gun-like device held in front of the mouth for the ELT student to cough in; for example, so producing the ’plosive consonants of a directed energy weapon (DEW). Sounds from the Weirding Module of Dune actually do cause explosions in the sense that the directed sound causes buildings to crumble and other structures; for example, human bodies, to crumple and collapse. For students who don’t like school, and for teachers who have to teach, it isn’t science fiction. Making the ELT professional ill enough to remove them from their post is a students’ activity that isn’t indicated as being an aspect of the teacher’s expected impotence in dealing with the curricula when the supposedly lucrative contract is signed to take them into the war zones of the Middle East where Westerners are often the target of terrorism. The premise of Dune is that Shaddam IV persuades the Atreides’ arch-rival, House Harkonnen, to attack House Atredies because it’s become too popular for the emperor to ignore it as a threat to his rule, ‘We will kill until no Harkonnen breathes Arrakeen air!’ In the Middle East where Saddam I of Iraq was deposed by the invading US army in March 2003, terrorist acts against Western workers are routine, and teachers, perceived as merely ‘talking heads’ (see Figure 4), are a ‘soft target’.

According to a designer of the science fiction world of the 1984 Dune movie, artist Ron Miller, the idea of death being a cough in sound had been the subject of US’ scientific research for at least a generation, ‘… inspired in large part by the old childhood trick of making a vortex cannon from an old oatmeal box.’2 Miller explains that there isn’t any escape, for those who don’t want to get into the cough-in-box, that is, the Fremen weapon hand-held in front of the ‘plosive consonants emitted from their throat-mike implantations. ‘Uroshnor’, for example, is an example of a killing word/sound directed at the mind and body of the Harkonnen target, which contained ‘… energy that generated the lethal sound.’ Of course, Dune is science fiction, which suggests that a cough-in-box is sufficient to kill in reality, ‘Chuksa!’ Should the classroom terrorist wish to inflict a heart attack upon the native English language speaker visiting Baghdad, that is, to improve the lot of the war torn: ‘Bless you!’